Well-known and loved by fans all around the world GAROU will perform in ERGO ARENA (Gdańsk/Sopot, Poland) in February 2020. The Canadian artist is one of the most captivating and charismatic musicians on the French stage. Since the end of the 90s, GAROU has been breaking all the canons. His sexy macho voice made hearts of women worldwide skip a beat. He says modestly about himself: “I conquered the charts, appearing in the right place at the right time.” His first meeting with the famous poet Luc Plamondon, the “Notre Dame de Paris” author, took place in a Montreal’s bar and was a turning point in the young artist’s career. Soon after this, GAROU started his cooperation with Celine Dion and Rene Angelil.

The singer has released as many as 8 albums so far and truly loves to perform live. His first album “Seul” from 2008 was sold in 2 500 000 copies within 11 weeks in France only! The next albums: “Reviens”, “Garou”, “Piece of My Soul”, “Gentleman Cambrioleur”, “Version intégrale” were appearing at relatively short intervals. Songs like ”Seul” and ”Gitan” became international hits. The brilliant artist recorded “Sous le vent” with Celine Dion – their collaboration was rich in musical ideas and lasted several years. Eventually GAROU wanted to be artistically “free” and to create without restrictive patterns. He chose his own independent path. His 6th album “Rhythm and blues” was gold after one week from the premiere release already! Incredibly talented writers, such as: Jean-Jacques Goldman, Pascal Obispo and Gérald de Palmas were involved in preparing the songs for the latest, 8th album “Au milieu de ma vie”.

GAROU is a multi-instrumentalist who masterfully plays the guitar, piano, harpsichord and trumpet. He has received many awards from the music industry, including “World Music Awards” and “Le Félix – Révélation au Québec”. Garou often changes genres, is full of passion and knows how to amaze. His voice, appearance and uniqueness attract fans around the world. He is a coach in one of world’s biggest TV hits: “The Voice” in France and in Canada. Recently Garou participated in “Destination Eurovision 2018” and his very own show “Gare à Garou”. The musician is passionate for new projects and always happy to introduce new ideas.

Tickets are on sale: 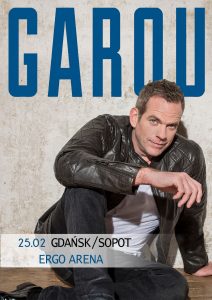