MARK KNOPFLER
ANNOUNCES
DOWN THE ROAD WHEREVER TOUR
2019

Mark Knopfler, one of the most entitled artists ever, has announced his 2019 tour. „Down The Road Wherever” will start in April in Barcelona, then concerts will take place in other European cities. This part of the tour will end in Verona in July. In August and September the famous musician with his band will visit the USA.

The artist will perform in Poland twice. His first show will be held in Cracow’s TAURON Arena on July the 10th, the second concert will take place on the 11th of July in ERGO ARENA, GDANSK/SOPOT.

Knopfler will release his 9th solo album (”Down The Road Wherever”) on the 16th of November. The musician has always been perceiving a tour as an integral part of the new album’s promotion.

Mark says: „‘My songs are made to be performed live. I love the whole process of writing them alone and then recording them with the band, but ultimately the best part is playing them to an audience live. I enjoy the whole circus, travelling from town to town and interacting with this group of players is a total pleasure. I’m really looking forward to it.”

Knopfler, who recorded ‘Down The Road Wherever’ in his west London studio, British Grove, will be performing on tour with an expanded ten-piece band most of whom have been working with him for more than two decades: Guy Fletcher (keyboards), Richard Bennett (guitar), Jim Cox (piano), Mike McGoldrick (whistle and flute), John McCusker (fiddle and cittern), Glenn Worf (bass), Danny Cummings (percussion) and Ian Thomas (drums). New additions will be Graeme Blebins (saxaphone) and Tom Walsh (trumpet).

The album ”Down The Road Wherever” includes 14 elegant, brand new songs inspired by Knopfler’s life. During the upcoming tour Mark and his band will play the new pieces as well as some old classics.

Recognized as one of the best guitarists ever, Mark Knopfler (together with Dire Straits and solo) has, so far, sold over 120 000 000 albums. Many of his song (“Money For Nothing”, “Sultans of Swing”, “Romeo & Juliet” i “Walk Of Life”) are considered to be ultimate classics. Knopfler has released 8 solo albums, together with another guitarist, Chet Atkins recorded “Neck and Neck” and cooperated with Emmylou Harris while recording “All The Roadrunning”. He has also created several soundtracks (for instance for such movies as: “Local Hero”, “The Princess Bride” and “Altamira”). In addition to producing his own records, Knopfler has also produced albums for Bob Dylan and Randy Newman. Knopfler received the Order of the British Empire in 1999 as well as a prestigious Lifetime Achievement Award in Ivor Novellos in 2012.

MARK KNOPFLER – WHAT THE PAPERS SAY

‘…music that flows with graceful ease: emotion recollected in tranquility, in Wordsworth’s phrase… The music shimmers with reflections of Celtic folk and blues, illuminated by Knopfler’s deft guitar playing.’

‘…the wry economy of short stories, while Knopfler’s music stays as unfussily erudite as ever…Thirty years on from Brothers In Arms the man with the gravelly voice, the limpid guitar and the crisp turn of phrase is still writing good songs and terrific lyrics.’

‘Mark Knopfler at his most personal…can still make the guitar sing without airs and graces.’

‘…a joy to listen to…His character tales remain as captivating as ever, while his signature electric guitar fills are a significant part of what makes (the) songs…work so well.

It is this ability to keep on adding new layers to his already multi-faceted sound that confirms Knopfler’s continuing brilliance.’

1. Can I enter, then leave the venue and try to get back using the same ticket?

3. I am a disabled wheelchair user. Where can I purchase my ticket? Do I get any discount?

Tickets for a special platform for our disabled guests are not on regular sale. In order to purchase a ticket for this section, please send a request at: info@ticketmaster.pl.

4. Beginning/ end of the show?

6. Are there any restrictions on photography?

Taking pictures is not allowed.

7. Are there any age restrictions?

Fans under the age of 16 need to be with an adult guardian or have a signed permission:  https://www.ticketpro.pl/

8. Where and how can I receive a media accreditation?

The accreditation deadline has already passed.

10. Is there a cloakroom/ a deposit box in ERGO ARENA?

Yes, it’s a paid service. Cloakrooms are optional 5 PLN. Deposit boxes will be placed outside, price for one item is 50 PLN.

11. Is there a car park nearby ERGO ARENA?

Yes – right in front of ERGO ARENA there is a widely available car park with place enough for about 700 cars and 15 buses. It costs 20 PLN to park a car and 50 PLN to park a bus on a concert day. CASH PAYMENT ONLY.

*Attention! The number of park places is limited.

12. More information about the ticket availability:

13. Answers for additional questions will be given from Monday to Friday: 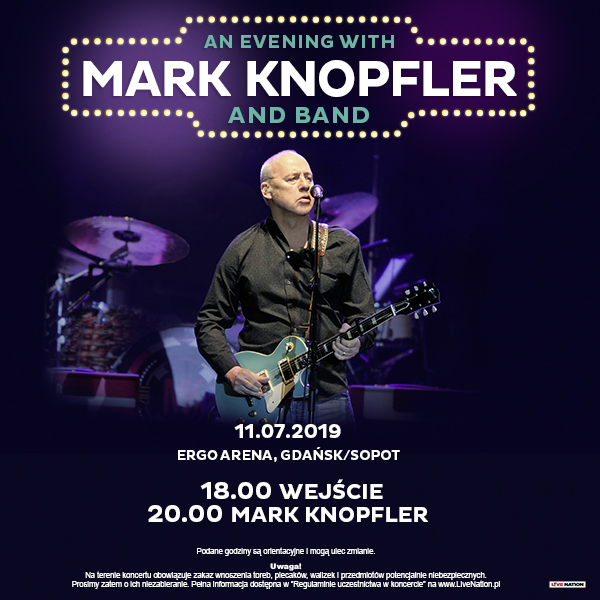