TO EASTERN EUROPE IN NOVEMBER!

“The mash-up everyone is talking about!” 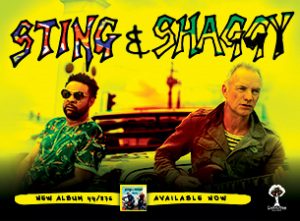 August 28, 2018 (New York, NY) — The Cherrytree Music Company and Live Nation announced today that following the European summer tour and North American fall tour, Sting & Shaggy will bring their dynamic and vibrant joint live show to a variety of Eastern European cities in November.  Hailed “one of the most anticipated concerts of the year” and “a two-hour musical melting pot”, the 44/876 Tour finds the iconic artists combining their bands to perform songs from their recently-released, island-flavored album, 44/876 (A&M/Interscope Records), and collaborating on each other’s most celebrated hits such as “Every Breath You Take,” “Englishman In New York,” “Message In A Bottle,” “It Wasn’t Me,” “Mr. Boombastic” and “Angel.”

Tickets will go on sale to the public ‪beginning August 31 at 10am local time. Members of the official ‪Sting.com fan club will have the opportunity to purchase tickets in advance ‪beginning August 29th at 10 am. Please visit www.sting.com/tour for details.

Sting and Shaggy initially joined forces to record a new song, “Don’t Make Me Wait” (which debuted at #1 on Billboard’s digital reggae singles chart), as a tribute to the Caribbean sounds that influenced them both and ended up recording an entire album full of joyful and uplifting, melodic music. With its title referencing their respective telephone country codes (44 for the UK, Sting’s birthplace and 876 for Jamaica, Shaggy’s homeland), 44/876 honors the duo’s deep-rooted love for Jamaica: Shaggy’s birthplace, and where Sting penned such classics as “Every Breath You Take.”

Along with continuing each artist’s exploration of reggae and its transcendent rhythms, songs like “Don’t Make Me Wait,” “Morning is Coming,” and “Gotta Get Back My Baby” reveal Sting and Shaggy’s shared passion for creating timeless music that defies expectation.

‪On May 25‪, 44/876: The Remixes was released on A&M/Interscope Records, featuring an albums’ worth of remixed songs from their album by a diverse range of artists including Chris Baio of Vampire Weekend, the Brazilian duo Tropkillaz, Cherry Cherry Boom Boom (Madonna, Lady Gaga) and Grammy-award winning producer Dave Audé, among others (track listing included below).

The tour is produced by RZO Entertainment and promoted by Live Nation Global Touring.

About the Cherrytree Music Company

Tickets are on sale: 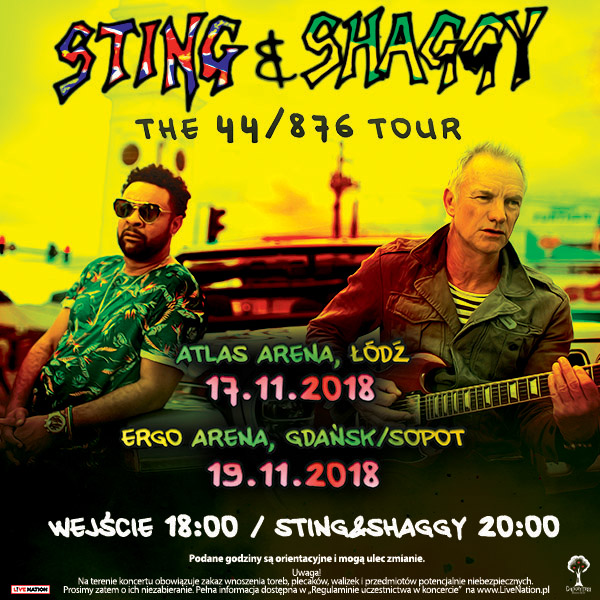